Warning: this post contains explicit language. If you are reading this aloud to your young children – why? If you would like the bleeped-out version, too bad.

You stole so much from me, and then you took my friend Carrie. Carrie Lynne Ladd passed away from peritoneal cancer on April 8, 2018. Carrie was Tina’s best friend, co-worker of 27 years, and one-quarter of our foursome who, along with Carrie’s partner Natalie, we vacationed with, tried new restaurants with, hung out with.

Carrie called me “Little Sprout.” ‘How’s it going, Little Sprout?’ ‘What are you doing today, Little Sprout?’  These are the words I hear still, every time I think about her. What I wouldn’t give to hear that again. Fuck you, cancer.

I will soon have lived longer than my friend who was 21 months older than me. This doesn’t make any sense.  The universe is off course. Fuck you, cancer.

She was burned up at 1800 degrees – I don’t know why I know that, but hearing it hit me hard. I don’t like picturing it, but I do. Seeing her ashes hit me hard too.  How can all the essence of one’s life be reduced to the contents of a hot chocolate canister?  It’s not, of course. I know it’s just the physical shell in there, but it still hits me hard. Fuck you, cancer.

Okay, so all the Fuck Yous, right? Cancer is such an asshole!

But my question is WHY? Why does cancer get to kill so haphazardly? Is it just a big cosmic game of whack-a-mole where some escape and some don’t? Why can’t cancer take all the shitty people in the world? The child molesters, rapists and murderers? Why Carrie? It almost seems beyond random – as if the Universe chose her for being such an amazing person. Fuck you, cancer.

#FuckCancer – it’s a great hashtag, T-shirt design, even a nonprofit committed to working for early detection and prevention of cancer. All that is good and fine, and how I personally feel most of the time. 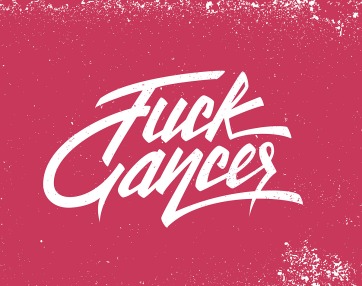 But let me tell you how Carrie lived with cancer. While there’s no denying Carrie was a fighter, she also had a peace and acceptance about the disease that grew, shrunk and grew again in her body.  I learned from her that there is something peaceful about accepting one’s circumstances – about accepting that you are probably going to die from cancer. Though Carrie’s decision to stop chemo was a jolt to us, it was a logical and timely decision for her – why continue to put toxins in your body if they are not doing their job? So she accepted it with grace.

And acceptance doesn’t mean giving up. It just means she came to terms with her circumstances and recalculated … just as my GPS regularly does when I take a route other than the one initially intended. That decision brought Carrie some peace. It brought her new direction and focus. And that was the right choice for her. Because peace is less stressful and more sustainable than war, and love is more powerful than hate.

Every cancer patient has to find their own way through the labyrinth of emotions, medications, decisions, uncertainty, turmoil. Carrie and I took different paths – physically and emotionally.  And I’m still angry at cancer. I still hate; I have not made peace.

Because, fuck you, cancer.